Sadly, plagiocephaly (flat-head syndrome) is often dismissed as being just a cosmetic issue or one that babies will outgrow.  Finally, studies done at the Children’s Institute in Seattle, Washington, US, show that there may be an association between plagiocephaly and developmental delay.

In this study led by Matthew Speltz, PhD, 472 babies between 4-12 months were screened for cognitive and motor development. Half of these babies had been diagnosed with plagiocephaly from Seattle Childrens Hospital’s Craniofacial Centre and the other half were a “normal” control group.

It was discovered that babies with some degree of plagiocephaly were more likely to perform worse on the Bayley Scales of Infant Development III than the control group.

These findings indicate that there may be an association between plagiocephaly and developmental delay or that children with existing motor problems are at risk of developing flatter heads due to lack of movement.

I find that babies with plagiocephaly often have other underlying problems such as:

Research shows the following babies can be at-risk of developing plagiocephaly:

****Babies with Plagiocephaly should be screened early on to determine whether there are possible motor, cognitive, neurological, orthopaedic, or cognitive delays. Definitely worthwhile catching a problem early! 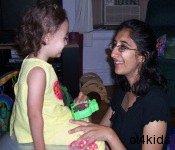